Connexion's Jane Hanks is in Normandy, where Monet and modern art vie for attention with stunning box tree configurations

Les Jardins d’Etretat was opened to the public just three years ago, and is both a contemporary garden and open air art gallery. It is the personal creation of a well-known Russian landscape gardener, Alexandre Grivko, who has been living in France for ten years.

He was looking for somewhere to create his own dream garden when he visited Etretat in Seine-Maritime, Normandy and fell immediately in love with the site and its stunning view over the cliffs of the Côte d’Albâtre.

'A change of perspective at every turn'

He bought the property and adjoining land and after two years of hard labour, it was open to the public. His aim was to reflect the landscape of Normandy in his planting. He knew he could not compete with the natural beauty of the view over the cliffs and sea, so he wanted to have a garden that would complement it, and would be futuristic but also rooted in its own history:

“I tried to design a sensory and very imaginative type of garden space, which immerses us into different worlds,” he says, “with a change of perspective at every turn and with a great feel for its historical origins but also cautiously leading to the future and my own vision.

“The topiaries remind us of Baroque and Renaissance gardens and are equally associated with the modern gardens of one of my favourite landscape designers Jacques Wirtz.

“Walls made of azaleas, rhododendrons, and camellias form the background for a romantic garden. A secret garden enclosed by bamboo summons up an Asian garden tradition. The Belle Epoque villa in the middle of the garden is literally a doorway to the history of the garden.”

Its first owner was a famous late 19th century French actress, Madame Thébault who was inspired by the impressionist painter Claude Monet’s love of gardening. The artist was a frequent visitor and it is from here that he worked on his series of paintings, The Cliffs at Etretat. There is a sculpture of him with his easel in bamboo in the contemporary garden, and amateur artists often come to stand by him to paint.

Madame Thébault’s villa, named Roxelane after the wife of Suleiman the Magnificent, one of her favourite heroines, is in the garden. Her artistic influence continues with the inclusion of a series of contemporary sculptures which are an integral part of the design of the garden.

'I agree and support the idea of blending art, technology, and nature'

Alexandre Grivko believes you cannot have a garden without art, or art without a garden.

The dream was not easy to realise. Daria Ermakova, his publicity manager, has followed the project from the start:

“Gardening on the top of a rocky cliff with strong, salt-laden sea winds comes with many challenges. We had to bring in tonnes of topsoil. Everywhere there were hard pieces of flint making it difficult to dig. Lorries are not really permitted in this fragile environment so apart from the soil we had to organise moving the big trees and huge sculptures in by hand.”

To create his garden, Grivko followed the example of France’s most famous landscape gardener, André Le Nôtre, who created the gardens at Versailles in the 17th century. 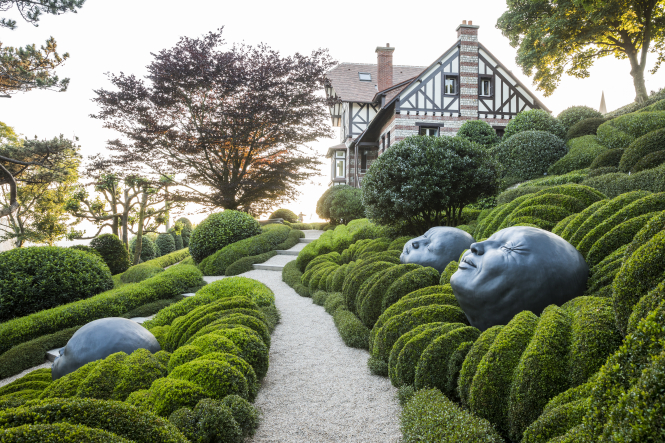 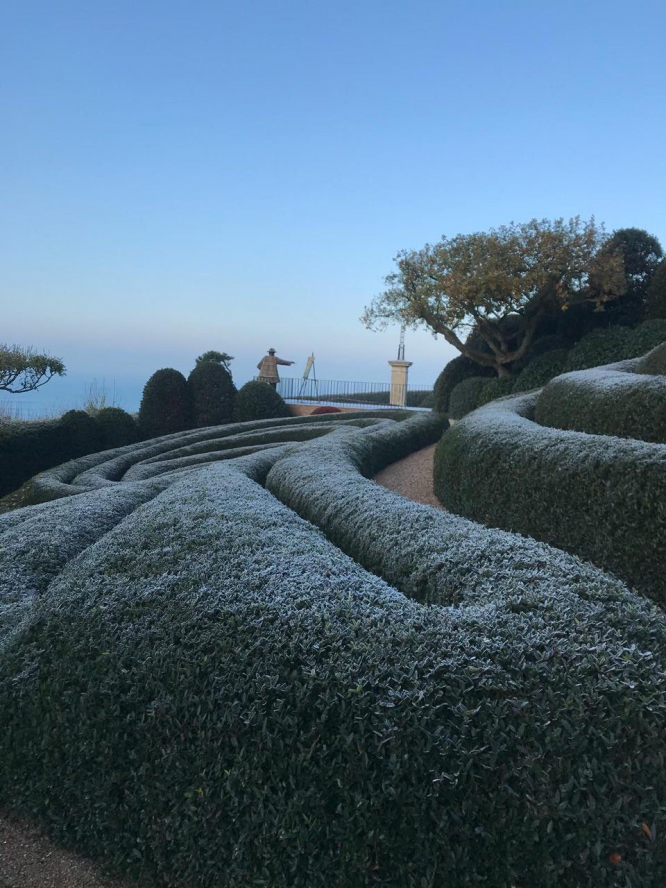 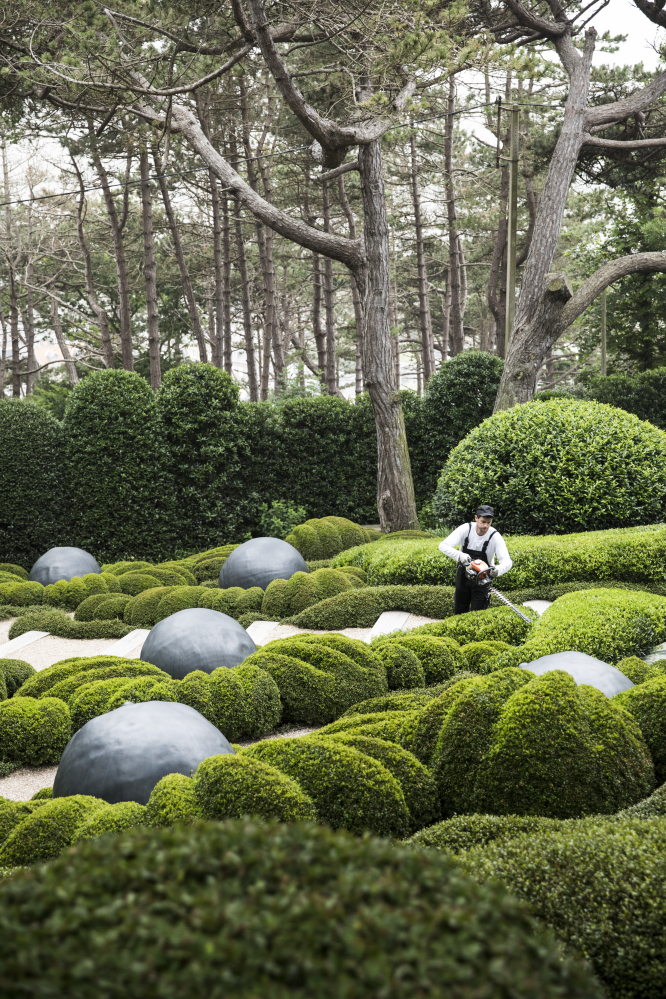 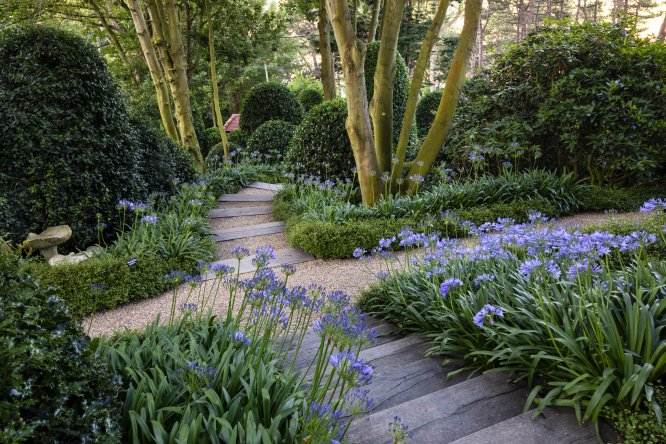 Grivko did the same, with just 35 varieties of plant, but he did not restrict himself to box: “One of our greatest successes has been the discovery of Phillyrea angustifolia,” says Daria Ermakova. “We use it in many places instead of Buxus sempervirens, which is a perfect material to trim and shape but very vulnerable.”

The garden uses other evergreen plants to ensure variety of form and colour. Elaeagnus ebbingei, or silverberry, which is resistant to sea air and harsh bright light, evergreen oak, three types of holly, common yew, eucalyptus and laurel. It is mainly made up of shrubs and trees but there are also swathes of blue, white and pink flowers in season, including agapanthus, allium, a delicate white clematis, white anemones, fritillary, cyclamen, camellias and rhododendron. The garden is also renowned for its collection of orchids, beloved by Madame Thébault.

Three gardeners keep Les Jardins d’Etretat in shape during the summer, literally, as they spend most of their time pruning. “The difficulty with a garden sculpted out of vegetation is that it keeps on growing. All the pruning is done by hand.” says Ms Ermakova.

There are seven different themed gardens. Jardin Avatar is at the entrance; Jardin d’Amont is at the highest point where the plants are in lines to imitate the rocky layers of the cliffs; Four kinds of bamboo with tall and lower clumping varieties are found in Jardin Zen and only white flowers grow here.

Orchids are in the Jardin d’Aval inspired by Alice in Wonderland, while Jardin Emotions was modelled after the first French oyster farm and it is here that box is mostly used. Jardin La Manche is in the centre where flowing mounded rows of silverberry, shimmer like the waves of the sea.

In Jardin Impressions there is the famous view over the cliffs which inspired not only Monet, but also Corot, Delacroix and Manet

It is here that Phillyrea angustifolia is used and is pruned in whirls and spirals, designed to represent the tides and movements of the sea.

Contemporary art features throughout. In the Jardin Emotions, sculpted faces by Spanish artist, Samuel Salcedo, made out of polyester resin and aluminium powder are laid in cushions of box to express different emotions. In the Jardin d’Aval there are wicker people and in the Zen garden terracotta sculptures hang from the trees.

Every year there are new exhibitions so that, says Ms Ermakova: “The garden adapts and changes with the times.

Visitors always have a strong reaction to the gardens. Some hate the introduction of the sculpture, particularly the faces in the Jardin Emotions, but the vast majority find it a very powerful, positive experience. I have never heard anyone say it leaves them indifferent.”

Alexandre Grivko is now working on a new garden in the grounds of Château de Jonval, at Pierrefonds (in the Compiégne forest in Oise) based on Alice in Wonderland. He hopes to get the permission to go ahead early this year and aims for it to be open in October 2021.