Les Jardins d’Étretat overhang the famous Cliff D’Amont, offering an iconic view over La Manche, which still attracts painters from all over the world. The sculpture on this terrace is a tribute to Claude Monet, who repeatedly painted the Cliffs of Étretat in his series 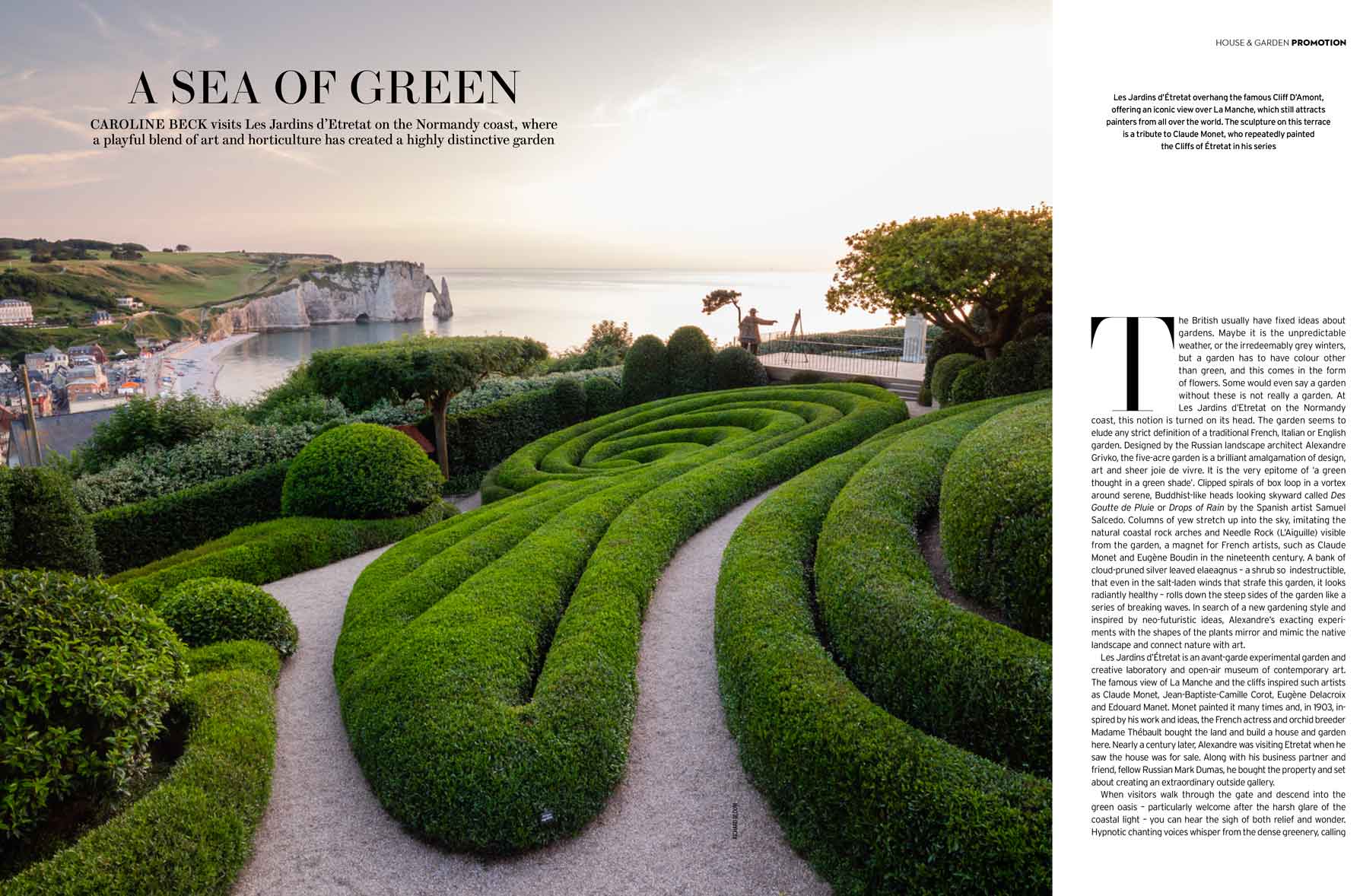 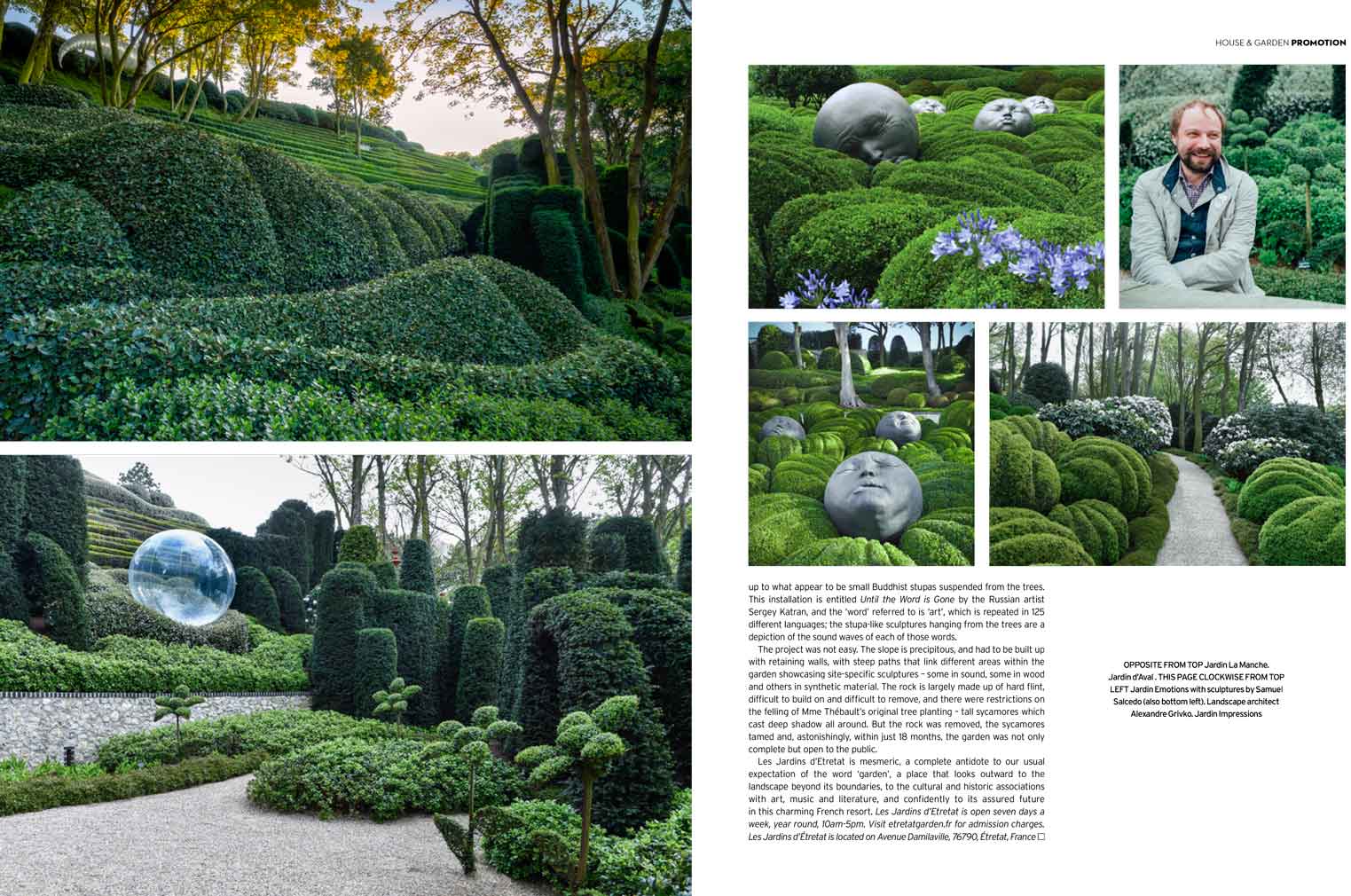 The British usually have fixed ideas about gardens. Maybe it is the unpredictable weather, or the irredeemably grey winters, but a garden has to have colour other than green, and this comes in the form of flowers. Some would even say a garden without these is not really a garden. At Les Jardins d’Etretat on the Normandy coast, this notion is turned on its head. The garden seems to elude any strict definition of a traditional French, Italian or English garden. Designed by the Russian landscape architect Alexandre Grivko, the five-acre garden is a brilliant amalgamation of design, art and sheer joie de vivre. It is the very epitome of ‘a green thought in a green shade’. Clipped spirals of box loop in a vortex around serene, Buddhist-like heads looking skyward called Des Goutte de Pluie or Drops of Rain by the Spanish artist Samuel Salcedo. Columns of yew stretch up into the sky, imitating the natural coastal rock arches and Needle Rock (L’Aiguille) visible from the garden, a magnet for French artists, such as Claude Monet and Eugène Boudin in the nineteenth century. A bank of cloud-pruned silver leaved elaeagnus – a shrub so indestructible, that even in the salt-laden winds that strafe this garden, it looks radiantly healthy – rolls down the steep sides of the garden like a series of breaking waves. In search of a new gardening style and inspired by neo-futuristic ideas, Alexandre’s exacting experiments with the shapes of the plants mirror and mimic the native landscape and connect nature with art. Les Jardins d’Étretat is an avant-garde experimental garden and creative laboratory and open-air museum of contemporary art. The famous view of La Manche and the cliffs inspired such artists as Claude Monet, Jean-Baptiste-Camille Corot, Eugène Delacroix and Edouard Manet. Monet painted it many times and, in 1903, inspired by his work and ideas, the French actress and orchid breeder Madame Thébault bought the land and build a house and garden here. Nearly a century later, Alexandre was visiting Etretat when he saw the house was for sale. Along with his business partner and friend, fellow Russian Mark Dumas, he bought the property and set about creating an extraordinary outside gallery.  When visitors walk through the gate and descend into the green oasis – particularly welcome after the harsh glare of the coastal light – you can hear the sigh of both relief and wonder. Hypnotic chanting voices whisper from the dense greenery, calling up to what appear to be small Buddhist stupas suspended from the trees. This installation is entitled Until the Word is Gone by the Russian artist Sergey Katran, and the ‘word’ referred to is ‘art’, which is repeated in 125 different languages; the stupa-like sculptures hanging from the trees are a depiction of the sound waves of each of those words.  The project was not easy. The slope is precipitous, and had to be built up with retaining walls, with steep paths that link different areas within the garden showcasing site-specific sculptures – some in sound, some in wood and others in synthetic material. The rock is largely made up of hard flint, difficult to build on and difficult to remove, and there were restrictions on the felling of Mme Thébault’s original tree planting – tall sycamores which cast deep shadow all around. But the rock was removed, the sycamores tamed and, astonishingly, within just 18 months, the garden was not only complete but open to the public. Les Jardins d’Etretat is mesmeric, a complete antidote to our usual expectation of the word ‘garden’, a place that looks outward to the landscape beyond its boundaries, to the cultural and historic associations with art, music and literature, and confidently to its assured future in this charming French resort.

Marie Claire Maison Italy
Les Jardins. Italie
Billets
We are using cookies to provide you with a better browsing experience Read our policy.