Les Jardins d'Etretat received the 1st Prize of the EGHN Garden Prize in the category of “Best development of a historic garden or park”. The jury was very impressed by the idea and the design of a garden that captures and uses its historical roots, in particular surroundings and its atmosphere do not only incorporate, but also identify with it and this is also avantgarde in the best horticultural traditions. 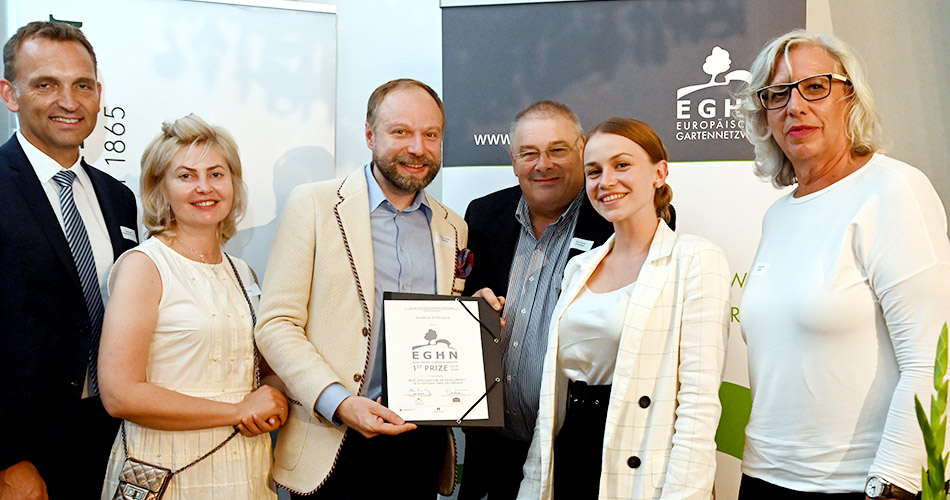 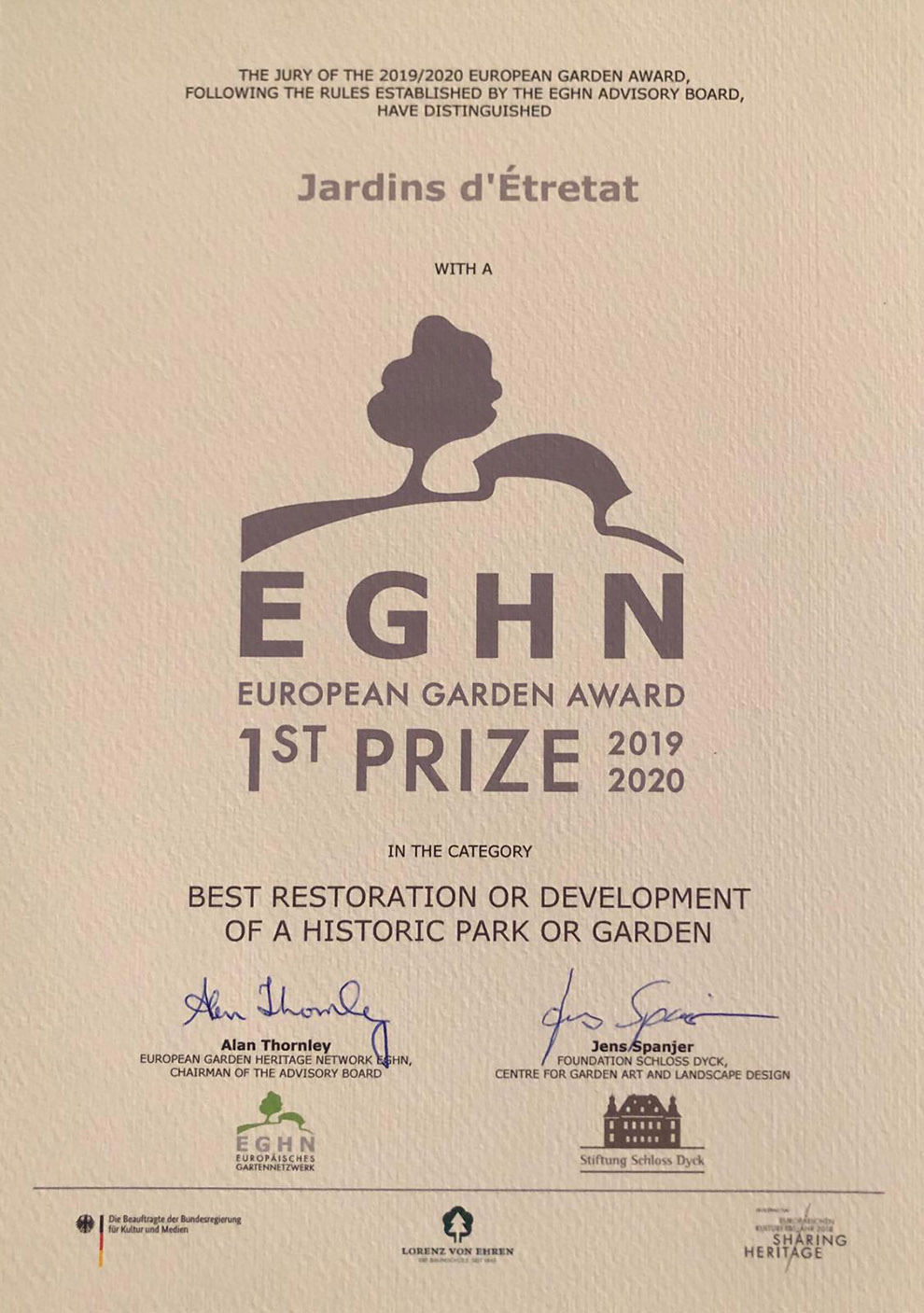 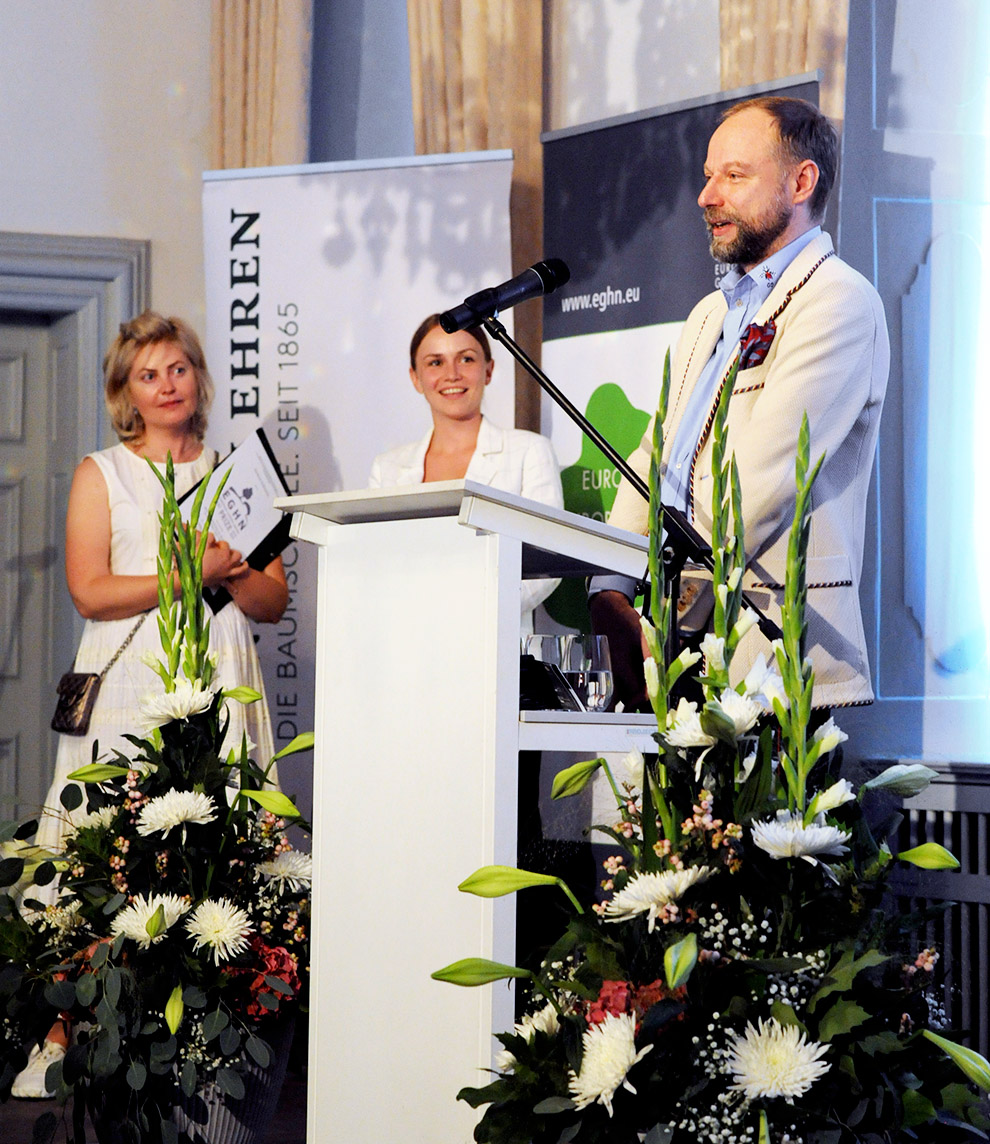 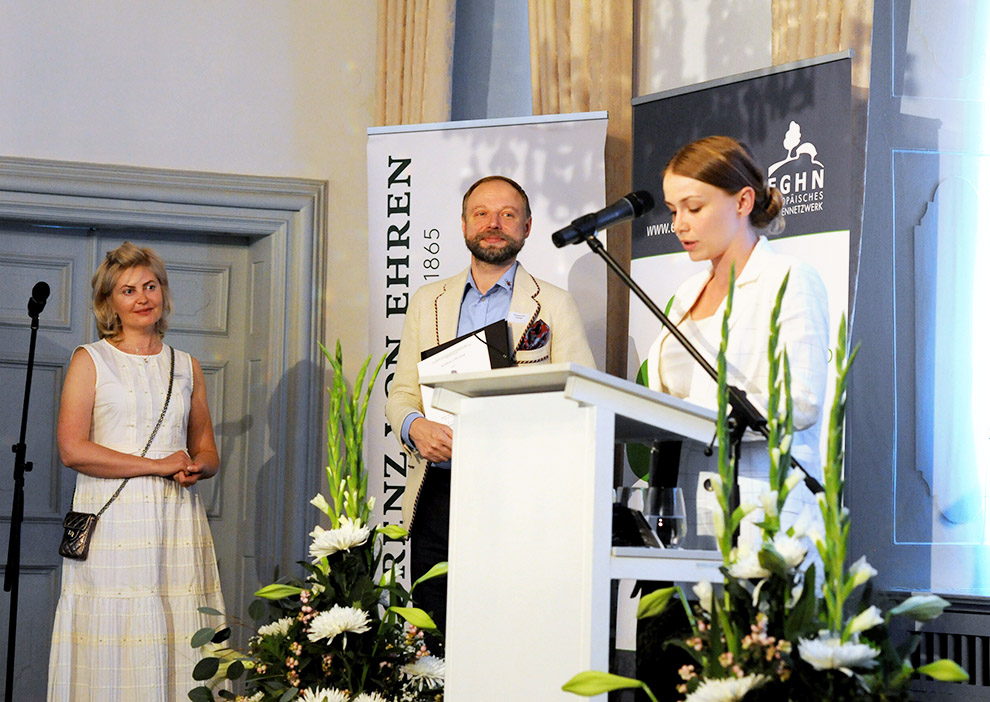 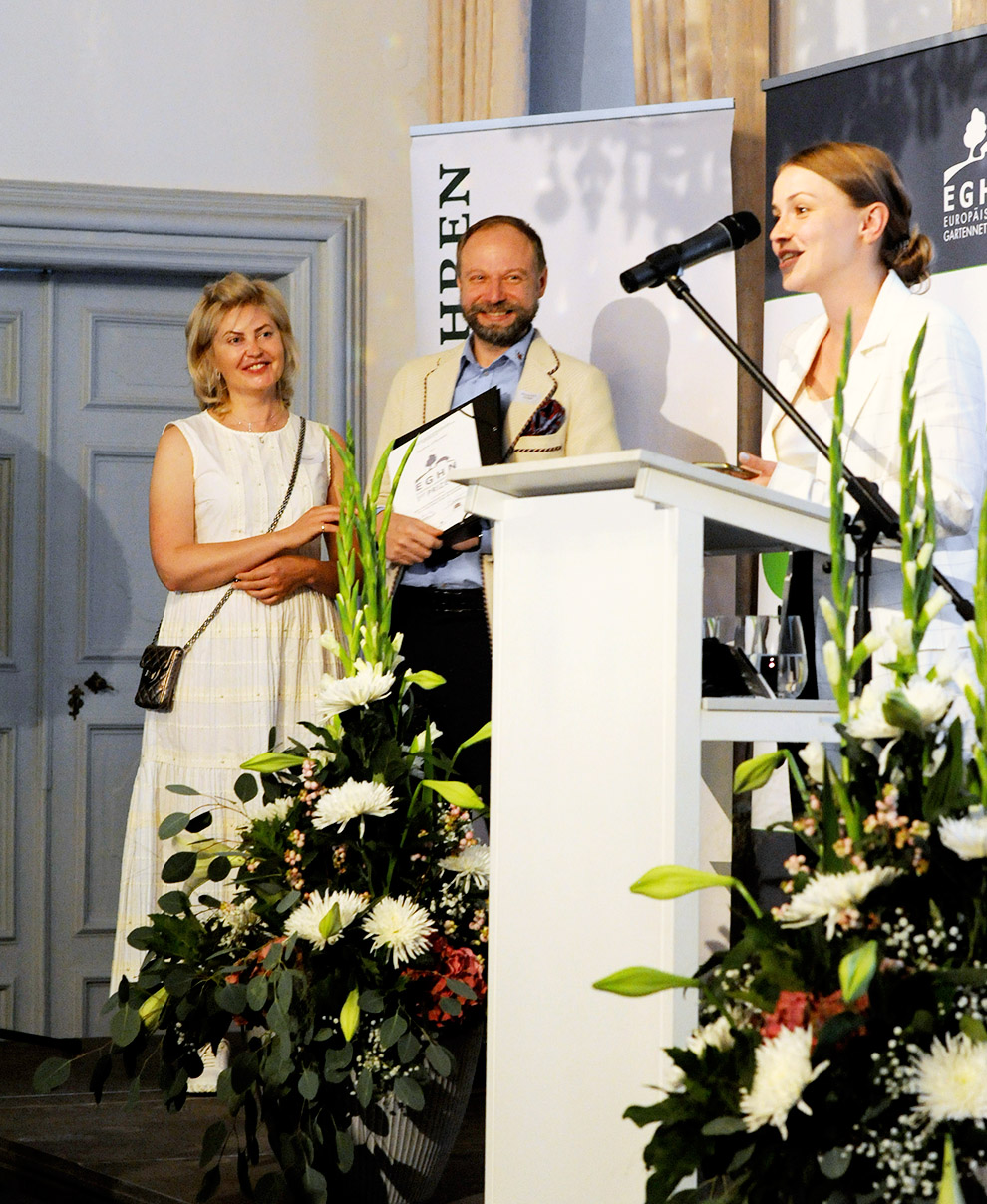 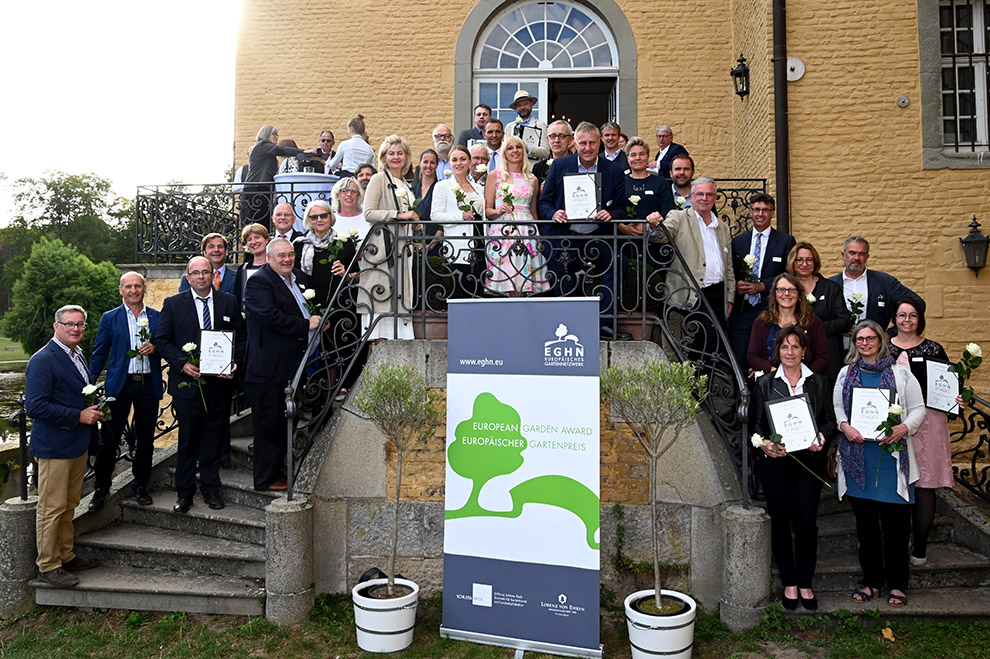 Versailles, Villandry, numerous palace parks and gardens – they represent an exceptional garden culture in France. And who can forget Monet’s garden, which enchants us in Giverny with a wonderful reflection of garden art and impressionism.

At Les Jardins d'Etretat, we encounter him again: up here on the steep cliffs is a magical place with a magnificent view that inspired Monet in his famous painting “La Falaise d'Aval, Étretat”.

One of his best friends, Madame Thébault, laid the foundation for the garden that we are honouring today with the European Garden Award, when she bought a Belle Epoque villa and planted one of the first trees on untouched land.

More than 100 years later, a young man from Russia visited this place and fell in love instantly. He bought the abandoned property. His name is Alexandre Grivko and he is graduated horticultural designer and florist.

The 7,000 m2 garden incorporates quite exceptionally the geological and atmospheric density of this stretch of land between the sky and the sea and it is a pure passion: green spaces and round forms proceed in waves up to the sea, a forest of clipped yews, whose tops stick out into the sky, regarding the conifers on the French coast, while arcs and gaps symbolise ebb and flow, box tree crowns are reminiscent of mussels washed up on the beach, narrow-leaf phillyrea (Phillyrea angustifolia) look like chalk cliffs.

Some of commonly occurring species in Normandy are planted, such as silverberry (Elaeagnus), but some species were imported from Japan, suchlike redvein enkianthus (Enkianthus campanulatus).

At the end of an alleyway, a secret garden enclosed hermetically by bamboo hedge summons up contemplative peace, whilst virtual place arises in the “Avatar Garden” with holly mingled with roots.

All of this takes place in front of homogenous greenery with shades of blue agapanthus, white camellias or even orchids, designed so that their blossom complies with the season. Right at the end of the garden, high above the sea, a wooden terrace offers breathtaking view of the chalk cliffs which once fascinated Monet so much... And Alexandre Grivko interweaves the work of humans and nature in his garden with the genre of contemporary art. He has invited renowned artists whose work temporarily or even permanently adds to the language and symbolism of this magical site. This is how the sculpture of Polish artist Wiktor Szostalo, who portrays a huge Claude Monet, creates surprise.

The most impressive works are enormous round heads made of elastomer resin by Samuel Salcedo, which seem to be laid in green ellipses and whose grimaces, sometimes sad, sometimes joyful, complete the mysterious allure of this wonderful garden.

Jazz concerts, theatre and other events round off the whole ensemble in Étretat, and annual festival has made an encounter between art and garden.

The whole place reflects its surroundings: it is a treasure chest full of horticultural, scenic and artistic works with poetic dimension and each of the individual spaces has its own charm. All of this is united with a single inspiration into one pattern that is simply gorgeous.

I am very pleased to be able to personally greet Alexandre Grivko and his team of IL NATURE – Alexandre is one of the most important horticulturalists who is referred to as “an ordinary gardener”.